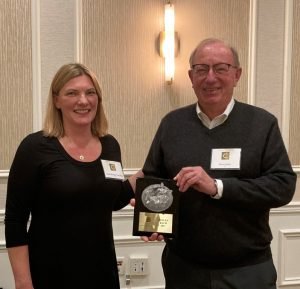 Our second recipient is also one of our earliest members, someone dedicated right from the beginning.

A graduate of the University of Wisconsin Law School, his involvement in family law began long before I knew him.

Like many of the Council’s early members, he served as a leader in several organizations and received numerous accolades as “super lawyer” and “top lawyer.”

Even after his term on the Board, he remained active, participating in advanced training sessions, often going off-script just to make it interesting.

He mentored members of his firm – and many others – throughout his years of his involvement.

In all that time, he attended every Annual Meeting and gave generously as a Sponsor without ever asking for anything in return. He committed to this community and supported it wholeheartedly.

He still does today, which again exemplifies the meaning behind the Dolphin.

You may know him as the 3rd Chair of CFLCW, or the one in the race with Janice to see who can register first for the Annual Meeting.

I know him as Dad.

Our second recipient this year is Attorney Steven Bach.